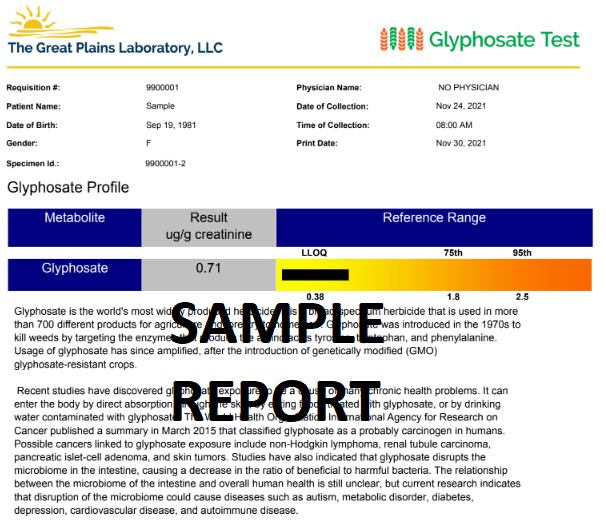 Glyphosate is the world’s most widely produced herbicide and is the primary toxic chemical in Roundup™, as well as in many other herbicides. In addition, it is a broad-spectrum herbicide that is used in more than 700 different products, from agriculture and forestry to wide-spread home use. Glyphosate was introduced in the 1970s to kill weeds by targeting the enzymes that produce the amino acids tyrosine, tryptophan, and phenylalanine. The enzymes of many bacteria are also susceptible to inhibition by glyphosate, thus altering the gut flora of many animals, including humans, compromising immunity. Usage of glyphosate has amplified exponentially since the 1970s, and glyphosate toxicity in humans is now extremely common.

Recent studies have determined that glyphosate exposure is a cause of many chronic health problems. It can enter the body by direct absorption through the skin, by eating foods treated with glyphosate, or by drinking water contaminated with glyphosate. A significant body of evidence indicates that glyphosate is likely toxic (ie. health-damaging) at levels well below the regulatory limit known to cause chronic toxic effects, and that it has teratogenic (embryo-harming), tumorigenic (cancer-causing) and adverse hepato-renal (liver-kidney) effects caused by endocrine disruption, oxidative stress, and metabolic alterations.

Studies have also shown that glyphosate disrupts the microbiome in the intestine, causing a decrease in the ratio of beneficial to harmful bacteria. Thus, highly pathogenic bacteria - such as Salmonella entritidis, Salmonellagallinarum, Salmonella typhimurium, Clostridium perfringens, and Clostridium botulinum - are highly resistant to glyphosate, but most of our beneficial bacteria are moderately to highly susceptible. And current research indicates that disruption of the microbiome can cause and exacerbate diseases such as metabolic disorder, diabetes, depression, autism, cardiovascular disease, and autoimmune disease.

And exposure to Glyphosate is also a likely culprit in the ever-increasing number of cases of gluten sensitivity and celiac disease, as research indicates that Glyphosate could very well be the most important causal factor in this epidemic.

All of the above issues raise serious concerns over the use of a chemical to which all life on earth is exposed, and highlight the need for testing and treating Glyphosate toxicity in anyone struggling with chronic health issues.

Save this product for later
Display prices in: USD